BIG PIG JIG® was born in Vienna, Georgia when a group of self-professed gourmets made wagers on who among them could cook the most succulent pig! That year, 1982, those creative people recommended combining a barbecue cooking competition with an established and well-attended arts and crafts fair and the county’s livestock association annual hog show. The merging of events has grown into a festival named twice by the American Bus Association as one of the Top 100 Events in America, three times acclaimed as one of the Top 20 Events in the Southeast by the Southeast Tourism Society, and recognized by Southeast Festivals and Events Association and International Festivals and Events Association with more than twenty five awards, including Best Georgia Festival. BIG PIG JIG® was listed by Travel Agent magazine as one of America’s Top 500 Festivals, touted by Tom Clynes, author of WILD PLANET!, as one of the world’s 1,001 Most Extraordinary Events. In March of 2004 the festival was awarded the Spirit of Barbecue award from the National Barbecue News proclaiming BIG PIG JIG® Event of the Year. The BIG PIG JIG® was listed in the New York Times best seller “1001 PLACES TO SEE BEFORE YOU DIE” by Patricia Shultz. The contest has also been named multiple times to the Discovery Travel Channel’s top ten list of “World’s Best Barbecue Contests”. Most notably the festival was featured on the Food Network’s “All – American Festivals” plus a one-hour special entitled “The BIG PIG JIG®”.

Twenty teams competed; cooking whole hogs only, at BIG PIG JIG® in 1982 and $1,000 in prize money was awarded to the top seven contenders. STUMP & SON, a team from Marietta, Georgia won the grand prize on their “train” grill.

Once the smoke cleared, the crafters packed and headed home, and the hogs were “gone to market,” the community recognized it had a winning combination. The setting was ideal, so a fall festival was born. A new site located on Interstate 75 near Georgia Highway 215 in Vienna was purchased and developed for the ever-increasing number of participants.

Decades after the idea took shape, the contest draws over a 100 teams cooking nearly 400 entries of hogs, shoulders, ribs, plus kettles of Brunswick stew, barbecue sauce, and barbecued chicken. The event attracts scores of spectators and requires more than 100 judges, countless volunteers, plus hundreds of pounds of pork. The Dooly County Chamber of Commerce awards more than $16,000 in cash, and trophies to BIG PIG JIG’s top cooks and continues to accommodate crowds of festival fun-seekers at the facility now known as BBQ CITY, U.S.A.

More than twenty-five events similar to BIG PIG JIG® have appeared across the Southeast since 1982. Some remain; some do not. Often imitated but not yet duplicated, BIG PIG JIG® remains the Southeast’s largest and Georgia’s oldest and OFFICIAL barbecue cooking contest.

“Fire it Up” Barbecue Cooking Team
prepares for judging

Myron Mixon, Chief Cook with Jack’s
Old South wows the judge with his
presentation. Jack’s Old South is a
three time World Champion and has
won the BIG PIG JIG® multiple times
in our 30 year history! 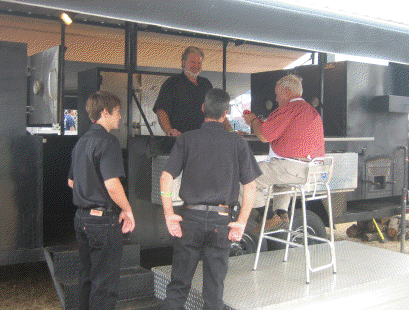 Hundreds of trained judges are needed
for the contest each year 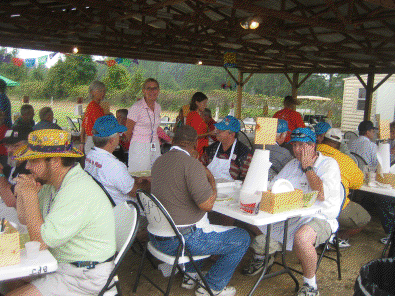 One of our more than 130 Cook
teams prepares a huge kettle of
Brunswick Stew for competition! 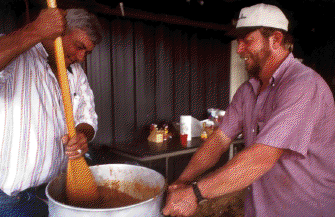